The Oculus Rift vs The HTC Vive

Last week, I got the chance to go to Oculus Connect and try out all of the latest demos.  It was a blast, and I met a ton of incredible people.  Shortly after arriving back in Virginia however,I found out that HTC and Valve's Vive Truck Tour was in Washington D.C. for their final day, and proceeded to head up to D.C. to try out their demos as well.  It was great timing, as I had already had time to think about the Oculus Rift demos I tried, and got to make some fantastic comparisons between the two.  The following is a quick write-up of my thoughts on both of them.

To start this out, I want to list a few things of note for this post:
So, let's jump on in!

For those who are not aware, the idea of presence with virtual reality is that you no longer realize that you are in a virtual world.  It is an incredibly powerful feeling, and is crucial to helping differentiate virtual reality from a fancy headset in my opinion.  Both the Rift and Vive try to achieve this through the use of high frame rates, low latency, and high resolution screens (among other things).  There are tons of factors that play into this, and it can be very hard to get this sense.

I've been using the Oculus Rift for a while now, trying both developer kits 1 and 2, and never "truly" felt a sense of presence.  The first time I got close to this was with the Toybox demo at Oculus Connect, as I began to feel like I was interacting with someone who was in the same room as me during the demo.  That said, it never really hit me in a big way that I was there.  Maybe this was just due to the demos I tried, but nothing ever gave me the sense that I was truly there, just that I was able to do some more unique things.

The Vive on the other hand, is a completely different story.  I have never felt such an incredible reaction from a video game in my life.  There is a specific demo where you are underwater, and on the bow of a ship, and you can actually look over the edge.  Supposedly there was just enough room for me to walk off the edge, and tried as I might, my body would not let me take that step.  Have you ever tried to bite your tongue as hard as you can, and found you can only bite it so hard before your body stops you?  That's the kind of feeling I had, but for a video game.  I've never experienced that before.  But it gets even crazier: At one point, a giant whale swims by and just pauses next to you.  Normally, I try to put my controllers through these creatures to see what happens, but again, I could not physically touch that whale.  Every time I got close, my body would naturally jerk away.  The slightest movements of this whale made me physical back away.

While it's completely possible that the jet lag I had made me more susceptible to the sense of presence, or that the demos were designed more for this, I do have to give the Vive credit for doing such an incredible job at getting those reactions out of me.  I was incredibly impressed at how large many of the objects in their demos were, and they were legitimately terrifying.  That said, I really like how Oculus handles their multiplayer.  Their controllers supported a much more natural way of communicating (along with voice) that the Vive cannot do (more on this next).

I'm gonna be quite honest: Oculus has the better hardware right now, hands down, in every aspect EXCEPT one: The positional tracking.  The Vive's positional tracking system (especially for the controllers) worked flawlessly each time, whereas I had many issues with being able to grab objects in games with the Oculus Touch controllers.  Hopefully this will be corrected in the future, but the Vive's hardware seems to be much better for positional tracking due to how it works.

That said, Oculus had a much more solid hardware experience.  Their headset is incredibly light compared to the Vive (I honestly forgot the Rift was there, and thought my sunglasses were the Rift briefly after), and incredibly comfortable.  The fabrics they use really do an incredible job with helping to get rid of the feeling that you are wearing this big device on your face.  The controllers as well are incredibly light, and it often felt like you weren't holding anything in your hands, to the point that I nearly dropped the controllers several times.

Speaking of Oculus Touch, I honestly think that these are the best motion controllers I have ever used.  Not only do they have the perfect combination of buttons, they also have a great control scheme: Touch sensitive buttons.  This is a game changer in my opinion, as you can perform gestures such as thumbs ups, high fives, fist bumps, and more, without pressing any buttons. This feature worked incredibly well, and I was often surprised at how natural it was to do things.  With the Vive, I actually had a bit of a hard time as I had to guess which buttons did what generally (though this was not too terrible in the end).

This was actually pretty neat: I got the chance to try Job Simulator by Owlchemy Labs on both devices.  These experiences, while different, highlighted some key differences in the devices. 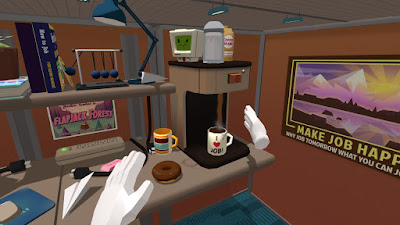 For the Oculus Rift demo, you were placed in an office and asked to do some simple tasks, such as fill up a coffee mug, eat a bagel, copy some papers, and turn on your computer.  Because a lot of this was grabbing objects and holding onto them, it was an incredibly immersive experience due to how the hardware works.  To grab an object, you physical clench the controllers harder, and your grabbing it.  This may sound odd, but it actually works incredibly well, and really made me feel like I was grabbing the cord to a computer.  The slight feedback through the controllers also worked very well, and gave a sense of presence.

For the Vive demo, you were placed into a kitchen, and asked to make various food items (I only had time to make soup).  This was a fairly simple task, and while fun, not quite as fun as on the Oculus Rift.  Because you ended up just pressing buttons, I actually did not get as strong of a sense of presence, and ended up just exploring the kitchen a bit more, rather than focusing on the task.

The big thing this demo highlighted was the difference in positional tracking, and how important that is.  During my Oculus Rift demo, I was actually unable to perform the coffee task easily, as I could not turn around to reach the coffee pot.  Each time I did so, the system would lose track of my controller, which forced me to awkwardly reach around while trying to keep the controller in the view of the cameras.  The Vive on the other hand, worked so well that it actually made the task TOO easy.  This is not bad of course, but highlights how the Vive definitely has a much smoother positional tracking system.

This was an interesting experience.  Both of these were fun (though I can't draw to save my life), but I feel like they were built for two entirely different users.
Medium came off as much more professionally focused, and had a much nicer and more precise set of tools.  Some of the things people made in it were downright incredible, and I was actually surprised with the amount of precision you had within it.

Tilt Brush on the other hand felt a bit like Microsoft Paint: Not as precise, but more fun to just mess around in.  I haven't seen anything crazy made with it, but it didn't like it was made to be a professional modeling application like Medium.  This was partially due to the controls, which have you flipping the controllers around in order to access different things.  Medium on the other hand made use of the joysticks heavily for selecting tools.

In the end, both are great experiences.  I am certain that Oculus VR will get out the final wrinkles in their positional tracking system, though I still have some concerns about how big of a space they could truly allow for.  The Vive is definitely not a consumer version yet due to it's weight and design, but gave the sense of having a slightly more immersive experience currently.  Both have nice, crisp screens, low latency, and superb games coming out for them.  Honestly, I am planning to try and get both of them as soon as I can, and plan to develop content for both as well.  Have you tried these devices?  Let me know what you think in the comments below!
Posted by Unknown at 11:03 PM